Jim Weaver is the son of Daisie and Lewis Weaver. He was born at the Field Hotel in 1912 and lived in Stehekin until he was a young adult. He returned often during the years his mother continued to live here, until her death in the late 1960’s.

The interview addresses mainly Jim’s memories of Stehekin in the teens, 1920’s, and 1930’s.

ROBERTSON: Tell me about your mother, your memories of your mother when you were a small boy.

WEAVER: My dad would be gone summers, working for the Forest Service, or in the pack train business that he operated. We’d stay there on the homestead, and a couple of cows, a big garden, and she sold milk and butter and garden  products to the hotel. And we never had any idle time, we always had to go and work on the intake. The longest I can ever remember that pipeline, water system in Devore Creek, we worked on that till I sold out and left it! (laughter). I think, you say what I done, I’d say I made a million trips! It was 1797 feet from the house to the intake! (laughter). But there was always a lot to do on that place. Wood cutting, and if I remember right, she did the laundry sometimes for the hotel there, we had a big square boiler with a woodstove outside to boil that water. And we tried various versions of water powered washing machines which were never very successful. We didn’t have maytags! (laughter). And this was the house before the days of raising the lake (shows picture). In the wintertime you could go through the whole thing Alaska style, through the center of the woodshed and into the root cellar. This is pretty much like the people in Alaska, or southeastern at least, lived. (Shows various buildings, garden spot). And we had this water system out of Devore Creek, which was put in in the early days to the Hotel Field, and for a state fish hatchery over there. And they had a cable crossing, and that was our transportation across there, and you’d better not fall off of the thing. It was a six inch wooden pipe with a plank on each side, and a double cable. Again, all the same as Alaska. 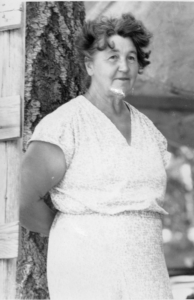 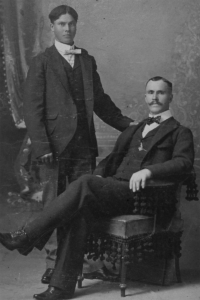 June 20, 1912 – Mr. and Mrs. L.M. Weaver moved to Stehekin Monday, Mr. Weaver’s application for a tract of agricultural land in the forest reserve near the mouth of the Stehekin river, has been reported favorably to the interior department by the forest service and he has been notified from the land office that the tract will be listed for entry. He will move onto the land at once and begin improving it. 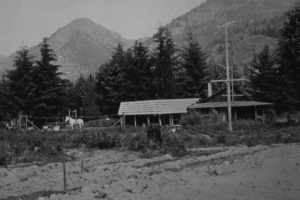 Below: Pipeline across Stehekin river 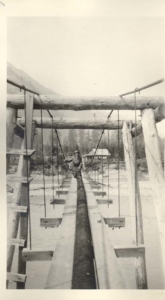 ROBERTSON: Can you elaborate what you mean by Alaska…?

WEAVER: Well, they’ve got these cable crossings up there in Alaska, and they live in what is literally a compound. You know, on account of the weather. And most of the places there, the early day homesteads in Stehekin had this sort of setup, a woodshed attached to the house, and a root cellar, maybe not directly off… so you could get to them easily, without shoveling a lot of snow. But on our place over there, it was literally based from  the beginning around that pipeline. And we later redid it, put in a different pipe, made a little hydroelectric plant. But it was put in in the early days for water for the Hotel Field, and as I say for this state fish hatchery, which was pretty good sized. And they had to have clean water for the fish hatchery, so  they had a settling tank. They came out of the creek with a flume, and then the settling tank went through several stages so that the water didn’t have a lot of gravel, or it’d kill those fish. Today they pump water, but in those days, they went through this. And this place was literally built up around that pipeline, and that pipeline crossing. I haven’t any pictures of it.

ROBERTSON: Where was that fish hatchery located?

WEAVER: Right near the Field Hotel. Out in the middle of the lake today. Your whole settlement of Stehekin, the hotel Field, the post office, the store, down at the old dock, and the barns for the hotel Field horses, were all there in that area. It was no different than pioneer life in any of the backwoods country. Because people had big gardens, raised a lot of their supplies, they had root cellars, where you have refrigeration today and frozen foods. They had root cellars, and a couple of cows, and they had to raise hay for winter feed for the cattle. And cut wood, the same sort of thing that a lot of people are trying to return to today, I suppose. But the problem always was refrigeration. The milk soured, all the food spoiled, and we used to have what we called a “ditch box”. The water out of the creek was reasonably cold, and we ran it through this ditch box to keep [food]… and it would have a space probably two feet wide and four feet long, with all of the dishes setting up in that cool water. And the only problem there was water snakes. The liked those things too! Now you had to do battle with water snakes and kill ‘em off. You’d open up the ditch box and there’d be a water snake in the middle of the butter or something! (laughter). Another non-glamorous predator!

1909    The state’s first trout hatchery was started here, near the Field Hotel. It was moved up river in 1915, and closed permanently in 1927, due to lack of cutthroats.

1917    Present Community Hall was built by the state for a fish hatchery and located at the mouth of the Stehekin River. It was moved up river in 1915.

ROBERTSON: Can you describe a typical day, as a small boy?

WEAVER: Well, you got up early. Woodstoves, you didn’t watch the Today Show and drink coffee like we do today! But people got up early and went to bed early, because the kerosene lamps were not all that much. And of course, everybody, as soon as he could, came along with either a Delco light, or a little hydroelectric plant, or a gas-powered storage battery charger or something for lights. That was before and after World War II, that was probably the principle ambition up there in Stehekin, was to get the hydroelectric or some kind of plant working for electricity. Until of course, today, the PUD has come in there. But everybody was trying to figure out a way to get power with those pipelines out of the creeks there. The PUD made fun of us with our homespun plants, and all our problems with leaves and everything, and they put in there, and they haul diesel up the lake to run the generator! (laughter) There I am on the power company again!

ROBERTSON: What were your chores?