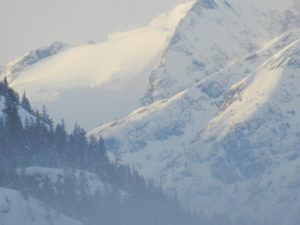 PART I: PL 90-544 was passed in 1968 and was acknowledged as a masterpiece of legislative effort which addressed environmental, visitor service and community issues. Wilderness Areas, National Park and Recreation areas were all established.

PART II: The historical interest in establishing legislatively designated areas in the North Cascades was presented with emphasis placed on environmental and recreational themes.

PART III: The passage of PL 90-544 was graphically portrayed as it relates to the Stehekin Community. The original bill presented to Congress included Stehekin as part of the North Cascades National Park. However, because of testimony offered by citizens in an intensive series of public hearings in the State of Washington and Washington D.C., the original bill was amended to create the Lake Chelan National Recreation Area (LCNRA) which included the village of Stehekin. Congress consciously separated Stehekin from traditional (preservation priority) national park management. They did this for many reasons.

PART IV: After holding public hearings, both the House and the Senate submitted reports which accompanied PL 90-544 in its final form. Senate Report 700 and House Report 1870 are the names of these documents. Whenever there are questions concerning what Congress intended for management in the North Cascades, these two reports are the legally acknowledged defining documents which present the management intentions of Congress. It has been a struggle for members of the Stehekin community to get the NPS to acknowledge the existence and contents of the Senate and House Reports. Hopefully, this review will reach more people than ever before.

Both the Senate and House Report accompanying PL 90-544 are clear concerning whether these lands were to be managed with a recreation emphasis, or a preservation emphasis. With a recreation emphasis, a community of responsible people can continue to live their lives and/or provide services for the visiting public. With preservation as the primary emphasis, the Stehekin community would be relegated to a human form of endangered species. Fortunately, the legislation and its history are clear. Congress declared that the values of recreation and community life are essential in the North Cascades.

“Altogether the Federal land in this general vicinity total nearly 7 million acres — an amount equaling 16 percent of the State of Washington and over half of all federally owned lands in the State. Because Federal landownership is so extensive, it is essential that the forest lands lying outside of the areas to be transferred to the Department of the Interior for administration continue to be administered in accordance with the principles of multiple use and sustained yield. That is not to say, however, that their outdoor recreation potentials should be ignored. On the contrary, one of the most persuasive arguments on behalf of this vast recreation complex is that it affords two of the principal Federal agencies with recreation responsibilities with an opportunity to develop a meaningful and coordinated outdoor recreation plan.

In view of the substantial acreage which will be designated as wilderness, it seems highly appropriate that the National Park Service should embark on the bold and imaginative development program which it described to the committee. This program should seek to maximize public use and enjoyment of the areas being transferred to its jurisdiction.”

On page 10 the following summary statement is made concerning Development Plans, “Although it involves federally owned lands almost exclusively, the enactment of this legislation would assure their management and utilization for outdoor recreation; whereas their continued administration by the Forest Service might not always result in recreational values being given priority over all other uses.”

Finally, on pages 12 and 13 — “… Because of the variety of activities enjoyed by the public within this vast area, and because large areas are, or will be, preserved as wilderness, the park and recreation areas established pursuant to the enactment of this legislation should be utilized to assure public use and enjoyment to the fullest extent possible without destroying that for which they are established. ”

SENATE REPORT 700: The Senate Report speaks more specifically to the Lake Chelan National Recreation Area (LCNRA) On pages 30 and 31 under “Boundary Changes” (Here the reasons for placing Stehekin in the LCNRA rather than the National Park are listed.) “Designate the lower Stehekin Valley and upper Lake Chelan areas the Lake Chelan National Recreation area instead of a part of the park. Many of the yearlong residents of the Stehekin Valley are descendants of the original homesteaders. Some 1700 acres, mostly on the valley floor are in private ownership, and in the past several decades a number of summer homes have been built … The lake … will serve as the primary access for park and recreation visitors approaching from the southeast. The village and the lower valley, therefore, will have considerable use, and development to accommodate these visitors will be necessary. … All of these factors were important in the committee’s decision to create a 62,000 acre recreation area here, instead of giving the area national park status.”

Furthermore, the State of Washington did not cede its rights over private property or jurisdiction over the surface of Lake Chelan. The NPS was given proprietary rather than exclusive or concurrent jurisdiction over federal lands. (This means they are an equal neighbor in the valley rather than having complete control over land management decisions.) Hunting was permitted in the LCNRA. The use of natural resources including firewood, sand, rock and gravel was permitted in the LCNRA. Circular #1 (more on this document later) was recognized as the primary management guideline for the LCNRA. Circular #1 “provides in part that outdoor recreation shall be recognized as the dominant or primary resource management purpose”. (page 28, Senate Report 700.) The law provided the foundation for continued, viable community life.

WHY IS THIS IMPORTANT?

If the general public and the media believe the law creating this area did nothing other than make Stehekin a hunting area within a park, the potential for this community to continue to exist is greatly diminished. PL 90-544 established many significant differences between this area and traditional parks. The sum total of these differences enable a community to continue to survive in this extremely isolated setting. If these differences are ignored the community character here will cease to exist. The stakes are high. This is why the review of legislative history is important. The law is important.

169,000 total acres designated for recreation priority (only 10% of all designated lands in the North Cascades has been given Recreational Priority.